Seeking the elusive trailing blackberry and blackcap raspberry, our group of eight began a trek up the Caren Range on a perfect morning on Saturday, July 31st. Our guide Barb Higgins, otherwise known as Sechelt Elder Xwu'p'a'lich, took us to a place where she has gathered berries many times.

On the way up, we passed huge logging clear cuts, and wondered about the effects on wildlife. I was surprised at the number of logging roads criss-crossing the terrain and indeed, on our way back down, a lost ATV-er stopped to ask us directions.

Our group of complete strangers was taking advantage of a "Live & Learn" class put on by One Straw Society. The class is funded by the Vancouver Health Authority and organized by Kim Wilkinson. Once at our destination, Xwu'p'a'lich had us make an offering to the spirits and led us in a very meaningful blessing for our environment. Then we were let loose with our bags and Tupperware containers.

The mountainside was strewn with logs and branches, with the occasional new growth Douglas Fir emerging from the scarred landscape. Tenacious berry plants struggled over the twigs and debris, offering up their sweet treats to the dedicated gatherers. Several in the expedition were experienced berry-pickers and talked about getting into a rhythm of picking, which they were reluctant to abandon when it was finally time to go. Great camaraderie developed over discussions about the need to develop a type of culture that appreciates and respects nature and her bounty. 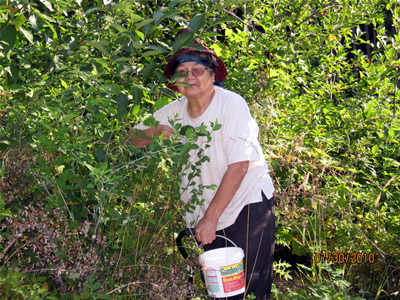 At one point Xwu'p'a'lich took a break from picking to sing a song to the people of the forest, to grandmother and to eagle – a song which she has been singing for years. She was generous with her stories and experiences, and I marveled at the many jobs she has had, the fascinating places she has lived and her vast store of knowledge and skills. She offered us pieces of smoked salmon at our 'tailgate party' in the shade, along with seaweed and granola bars. We compared our morning's gleanings – in addition to the blackberries and blackcaps, there were loads of huckleberries, some thimbleberries and even the occasional ripe salal berry.

Back in Sechelt at Barb's house, we felt that we had indeed shared a fabulous morning as we hugged her goodbye after hearing about her upcoming plans for more classes. On August 20h there will be an Ocean Walk & Cockle Harvest. (Cost: $15).