So I am continuing my journey of becoming a chicken farmer.  This is year 3 coming up.  I’ve discovered many things.

I cannot raise a family on chicken wages.  I need to keep my job in the movie industry for the next 7 years or so.

My wife Heidi is not a farmer. On the other hand, Heidi has discovered and realized the issue with industrial food and its downfall.  When it comes to slaughter day, she’s out there with bells on.

My eldest daughter Lily, will not eat at McDonalds, and Joel Salatin from the movie, “Food Inc” is kind of my hero.

Last year was a huge year in terms of growth on many levels though.  We received our Class E slaughter license, which allows us to slaughter our own poultry for sale. With regards to our Class E license, as you may know British Columbia has eased up on its rules surrounding farm gate sales and they have been certifying small farmers to do their own slaughtering and processing.  I was # 3 on the coast to be certified last year.  This was a very big step.

Also we became a BCSPCA certified farm.  This was in large due to the desires of a woman on the coast named Gillian Brady.  Gillian wants to promote the SPCA’s philosophy and offered to pay for the inspection and annual fees for 2 years for two farmers on the coast.  I was one of the lucky recipients.  It was a lot of paper work on my behalf.  In doing all those forms it offered me the insight of looking at my operation in a more professional manner.  As much as I don’t see the need for a biosecurity plan, I do see the need for order and cleanliness.  I believe that it is a great idea for the SPCA to take on livestock issues.  They too will get to understand the difference between small farms and the agribusiness.

We did 3 different batches.  1st was all the meat birds and that occurred over 4 mornings.  This was amazing for me.  For 3 mornings I had as crew, my wife Heidi, my mother-in-law Jude, and a friend Andrea.  On the evening of the 3rd day My eldest daughter Lily asked if she could help.  I said,  “sure, we start at 6am”.  Low and behold at 5:50am I look up to see my 12 year old daughter coming down the field dressed and ready to go.  Lily was fantastic.  Heidi showed her how to clean and off she went.  Every once in a while she’d say, “hey dad look” and there she’d be showing off her newest form of jewelry, something in an intestine necklace or heart ring.  She made me laugh.  Three generations of my family down in the field killing and cleaning birds.  I know it sounds kind of weird but I was very proud.

Then came the laying hens.  After 2 years, conventional layers kind of wear out and cease to lay many eggs.  They need to be replaced.  In the past we did not know what to do with the carcasses so we literally threw them away.  This was a real waste.  Oddly enough until our friend Robin Wheeler pointed this out I was oblivious to this waste of good food.  This year though we slaughtered and processed 30 of them and sold them for $6 per bird.  I think people really liked them.  Very small birds but good organic meat.  Good for soups and curries.

Last but not least were the turkeys.  Our smallest was 20lbs and the largest 34lbs.  Growing turkeys is fun I think.  They’re not very smart but kind of cute.  They follow you around, make great gobble sounds, and in the end taste really good.  When we first set up to process the turkeys I asked one of my 9 year old daughters to hang out with the turkeys in the  portable pen until I was ready to slaughter them.  I was not thinking.  I took the first turkey put him in the bucket and slit his throat.  After he had died and been plucked I turned to get the next one.  To which I see Sidney my daughter all teared up and a mess.  She proceeded to tell me that she had named all the turkeys, and I was about to kill Frank.  Frank was the large 34 pounder.  So before cleaning he probably weighed at least 50lbs.  Sidney pleaded for amnesty.  I said yes, for one week.  I explained that Frank was going to be our Thanksgiving turkey.  She agreed that if I let him live now, then she will eat him later.  So I hauled Frank back up to the main turkey yard and let him live for one more week.

As I write this article all the happenings of last year just keep coming in.

For instance, once the meat birds reach the age of 3 weeks we put them down in our pasture in pens.  These pens hold approx. 70 birds each.  These pens have a watering system and feed troughs.  We move the pens daily.  Moving the pens daily does 2 things.  It spreads the manure and gives the birds fresh grass and bugs every day. 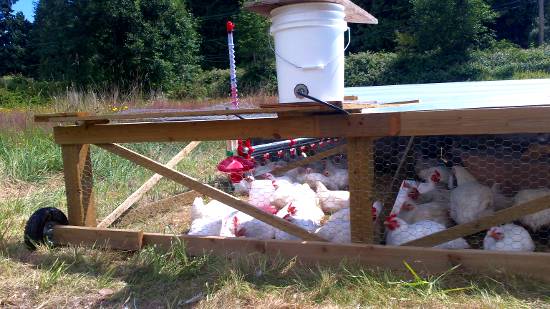 Last year my watering system was a nipple water system attached to 5 gal buckets.  The buckets gravity feed into the waterers and for a while the birds do just fine.  What we discovered is, once they become larger they start to consume lots of water.  The birds become kind of lazy and seem to refuse to work so hard as to get enough water from a drip nipple.  Ultimately they become dehydrated and if more water is not applied in different ways the birds start to die.  This year I will basically plum the pens to pipe/hose and use more of a dish system which allows them to drink to their full content.

We purchased new layers this year, 40 pullets from a hatchery in the valley.  They came kind of small and had extreme beak trims on them.  Overall I was not very happy with them.  After this batch I am convinced that I will buy day old chicks for layer hens and raise them myself.  This year I was hoping to live into raising 100 layers down in our lower field and housing them in a moveable house.  My wife has convinced me to wait a year.  Over the year I will design and build the hen house.  It will probably live on a skid system and I will drag it around when needed.

So we are not going to put 100 layers down in the field, but we are probably going to do two batches of meat birds.  This should give us approximately 300 meat birds for ourselves and to sell.  With a Class E slaughter license we are allowed to process up to 10,000 lbs of live weight.

This year will bring the expense of new waterers, new fencing, more heat lamps, more ventilation in the brooder house, and more processing.

Ah just a final note on processing.  This is the clinical term for killing, cleaning and getting rid of the extra bits from the animal.  “Processing is not for the faint of heart”.  This was my quote from last year.  I will, as always, encourage my customers to be a part of the slaughter process.  Being a part could simply be at the end of the line bagging and tagging.  With all the emphasis we as North Americans are putting on local food and the thought of becoming more connected with our food source, it is important for us as carnivors to face the fact surrounding that fresh cut of meat on our plates.  As Martin Luther King said, “ the truth, shall set you free”.

All for now, Sincerely Lee Riggs