The Green Film Series will open their fall season on Monday, September 15 with the film DamNation at the Gibsons Heritage Playhouse.  A second screening is scheduled for Thursday, September 18 at the SC Arts Centre in Sechelt. This film explores the changing attitude towards dams in the past 50 years, their removal and the recovery of the fish and eco-systems of the rivers.

It is a timely film for British Columbia as the Province considers building larger dams such as Site C in the Peace River Valley and independent power plants on our rivers, while in the US they are beginning to remove dams and find more cost-effective and innovative solutions.

A short film by Vancouverite Damien Gillis, Site C Dam: Food for Thought will also be screened. Some of BC's most productive food growing land is located in The Peace River Valley. Local resident George Smith will present an update on the Site C dam proposal and a discussion will follow the films.

This powerful film odyssey across the US explores the change in attitude from pride in big dams as engineering wonders to the growing awareness that our own future is bound to the life and health of our rivers. Dam removal has moved beyond the fictional Monkey Wrench Gang to go mainstream. 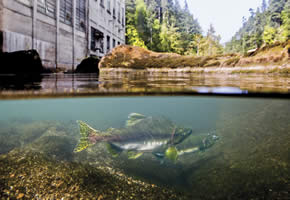 Directed and edited by Ben Knight, withTravis Rummel,co-director and co-producer, and Matt Stoecker, co-producer and director of underwater photography, DamNation conveys experiences known so far to only a few, including the awe of watching a 30-pound salmon hurtling 20 feet into the air in a vain attempt to reach the spawning grounds that lie barricaded upriver. We witness the seismic power of a dam breaking apart and, once the river breaks free, the elation in a watching wild salmon after a century of denied access swimming their way home.

Prevented from migrating any further upstream, a spawning pair of pink salmon flirt over a gravel bed a stone’s throw from the now removed Elwha Dam powerhouse in a scene from DamNation. Photo: Matt Stoecker.

This year the Series is offering season passes for $40 for all of the fall films. The passes are a way to support the Green Film Series to make sure these great documentary films continue to be shown on the Sunshine Coast.

A special Wood Duck Bus excursion to the Sechelt screening is being hosted by the Ruby Lake Lagoon Society. The bus will leave Madeira Park and bring passengers to the Arts Centre. Please call the EarthFair store at 883-9006 from more information.

The Green Film Series is dedicated to using film as a tool for community engagement on environmental and sustainability issues and is produced by Rhizome Up! Media. The screening events are meant to foster the role of film as a catalyst for dialogue, networking and action. For more information or to reserve seats or buy a season pass go to: www.greenfilms.ca

Doors open at 7 pm with the film starting at 7:30 pm. Admission is by donation. The Gibsons Heritage Playhouse is located at 662 North Road in Gibsons, BC. The Sunshine Coast Arts Centre is located at 5714 Medusa at Trail Ave. in Sechelt.