The Green Film Series will screen Symphony of the Soil on Monday, June 8 at 7:30 pm. at the Gibsons Heritage Playhouse. This artistic film examines the miraculous substance soil drawing from ancient knowledge and cutting-edge science. The United Nations has declared 2015 as International Year of Soils to increase awareness and understanding of the importance of soil for food security and essential ecosystem functions

Filmed on four continents, featuring esteemed scientists and working farmers and ranchers, Symphony of the Soil is an intriguing presentation that highlights possibilities of healthy soil creating healthy plants creating healthy humans living on a healthy planet. Our human relationship with soil, the use and misuse of soil in agriculture, deforestation and development, and the latest scientific research on soil’s key role to improve current environmental issues are also examined. 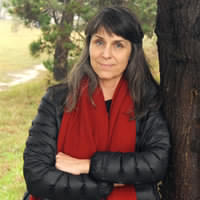 For the last fifteen years she has focused primarily on films about agriculture and the food system. Symphony of the Soil was designated a Critics’ Pick by the New York Times and was shown at the United Nations in New York City on World Soil Day which launched the UN International Year of Soils. “Unfolding with gentle joy and an unexpected beauty, this ode to the miracle of the Earth’s topmost layer gives us a newfound respect for the ground beneath our feet.”– Jeannette Catsoulis, New York Times, Critics Pick.                                          Deborah Koons Garcia, photo by Nic Coury, Monterey County Weekly

In recognition of June 8 as World Ocean's Day, a short preview of local filmmaker Sarama's upcoming film This Living Salish Sea will be shown. This film is scheduled to premiere this fall.

The Green Film Series is dedicated to using film as a tool for community engagement on environmental and sustainability issues and is produced by Rhizome Up! Media. The screening events are meant to foster the role of film as a catalyst for dialogue, networking and action. For more information or to reserve seats  go to:greenfilms.ca.

Doors open at 7 pm with the film starting at 7:30 pm. Admission is by donation. Light snacks and refreshments are available before and after the film.The Gibsons Heritage Playhouse is located at 662 North Road in Gibsons, BC.