Unist'ot'en Bring Their Story to the Coast

The women sit with quiet dignity as they are introduced to the audience at the gathering in the Sechelt Arts Centre. These Unist'ot'en Hereditary Chiefs of this matriarchial clan of the Wet’suwet’en Peoples and their daughters and granddaughters are tired. They have been traveling the Coast of BC to bring their story of stopping gas and oil pipelines from crossing their territory. It has been six long years of defending that territory. 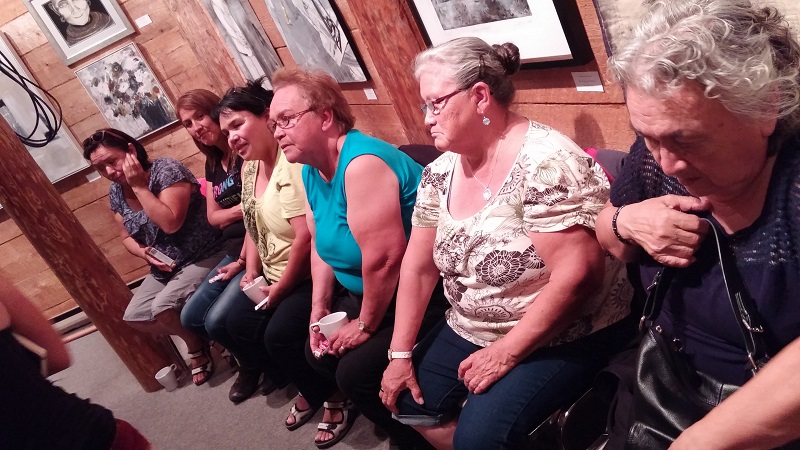 A large audience of around 75 people has gathered to learn more about what is known as the Unist'ot'en Camp, it's purpose and how they can help. This tour is part education and part fundraiser for the Camp and a new Healing Centre. The evening opens with a short film that gives a background story, a prayer and poetry by local elder Barbara Higgins and a welcome drumming and song.

Spokesperson Freda Huson appointed by the Chiefs explains that the Camp has a combined purpose for their people. " One is to bring back a way of life that has been lost," she says, " and another is to stop the pipelines through our river. In doing so we have to use our own tools." By that she means they continue to occupy and use their traditional unceeded territory and have reinstated the traditional Free Prior and Informed Consent Protocol. 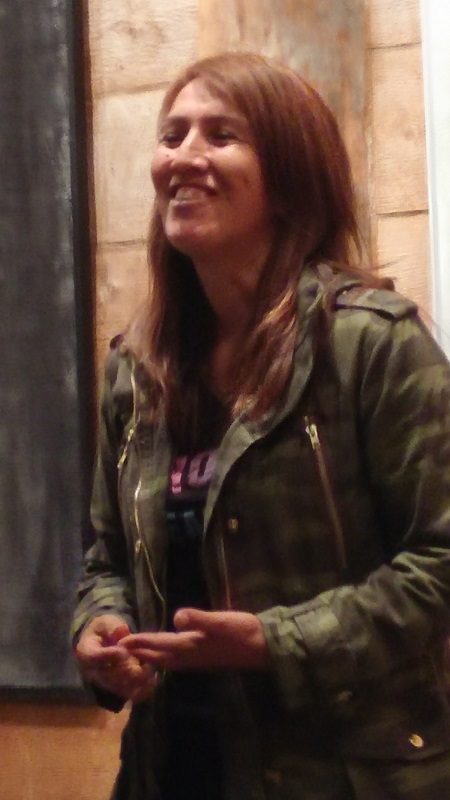 The film explains that three pipelines have been approved to cross their territory. Two for tar sands bitumen and a third for fracked natural gas by Enbridge, Kinder Morgan and Chevron and Woodside Petroleum. A total of eleven so far have been proposed.

In 2009, the Unist’ot’en clan of the Wet’suwet’en nation began a permanent community directly in the path of these pipelines. A permaculture garden, a solar-powered electric grid, a bunkhouse, elders’ trailers, campgrounds, a root cellar, a traditional Wet’suwet’en pithouse and a two-story healing center with an industrial kitchen and counseling space have all been built with crowd-sourced funds and volunteer labor.

The camp is located on the shores of the Morice River (Wedzin Kwah) and mouth of the Gosnell Creek.  These are tributaries to the Skeena, Bulkley, and Babine Rivers. Huson tells the audience about surveillance by drones, vehicles passing in the night, and the RCMP and Enbridge sending contingencies to gain access to their land. They worry about possible violence.               Freda Huson

The entourage is introduced including Chiefs Katheryn Mitchell, Helen Mitchell and Doris Rosso. After introductions, Chief Doris Rosso addresses the crowd giving a history of the Camp and why they are doing this. She says their grandmother, late Chief Knebedeas Christine Holland taught them the traditional ways and always told them, "Don't sell Yinka Dini territory." Doris says, " This is not something we just started. The Clan has turned down a lot of money offered to them by the companies."

"In 2010 we kicked out Enbridge," she says to loud applause. "They had set up a camp on our land and we told them to leave." She says the land belongs to the three of them (Doris, Kathryn and Helen). That they are one of the families left that still occupy and use their land.

Freda Huson gives more background on the past six years she has put her life on hold. The first year they brought in NGO's to help deal with industry and the government. The Council of Canadians, Independent Environmental Network and Greenpeace all offered instruction. The second year they focused on education. In the third year they worked with Vancouver Island Forest Action Network and began fundraising and workshops. She says she travels to help people to understand that "we are just trying to live our life."

Huson says she doesn't really like to call it a camp because it is her home and that is where she lives. They live a productive life there raising and gathering food, building and teaching. They are concentrating on the new Healing Centre now. A place where families can come to heal. She says they have a high incidence of alcohol and drug abuse and youth suicide on the reserve. Half of the money raised on this tour will go to the new Healing Centre.

David Ages from Galliano Island has been helping with construction at the Camp for a while now. He gives us an overview of what they have accomplished with donations and volunteer labour. He proudly reports that the basic foundation and first structure of the Healing Centre was constructed in only 3 weeks.

This two-story building will be built in three phases. The first phase will be a 2000 sq. ft. building with heated floors and a kitchen and dining hall. The second phase planned for next year will have a centre pod that will serve as the reception area and have bathrooms. There will also be meeting rooms and offices. Phase 3 will have sleeping accomodations especially for the families coming to heal together.

He tells us that people are always needed to build, cook, chop wood and many various jobs. "This is really a different experience for young activists," he says. " Far different than demonstrations and rallies."

The youngest of the group, Destiny has a story to tell us. She is helping at the Camp and was on Protocol duty when David Suzuki approached the entry. When she asked him his Protocol question, "How will your visit benefit my people?", he didn't know what to answer. She asked him to wait and went back to report to the others. "After some discussion we decided to let him in," she says, to much laughter from the audience. This young woman is an example of what the future can be for these people. Strong, confident and self-reliant.

The group hopes to raise enough funds to continue their work through the winter. Volunteers, donations and help on many fronts are always welcome. You can get more information by going to their website: unistotencamp.com.

At first I thought to myself, I don't want to hear this, but then it came to me as these good people gave us an update on what their group was doing, how connected all of this is. Each of these groups, the Unist'ot'en and all of us are fighting for the same thing and we are all connected.