A standing room only crowd of 150 people gathered to learn more about the proposed Sunshine Coast Solar Co-op on Saturday, March 21 in Gibsons. Organized by members of the Gibsons Green Team and Sunshine Coast In Transition, the meeting brought together interested community members, local solar contractors and the SCRD.
Green Team member Gayle Neilson told the crowd that this was the beginning of a new group and a perfect time to move away from fossil fuels with a grassroots start-up. Solar energy is now around 9.9 cents per kw hr.

Facilitator Lee Ann Johnson outlined many reasons for moving to solar engery and a co-op including:

SCRD Sustainability Education Coordinator Julie Clark told the crowd that we are working on these solutions together and reiterated the We Envision Sustainability Plan developed by a community team. In 2012 the SCRD adoped a Solar Readiness P 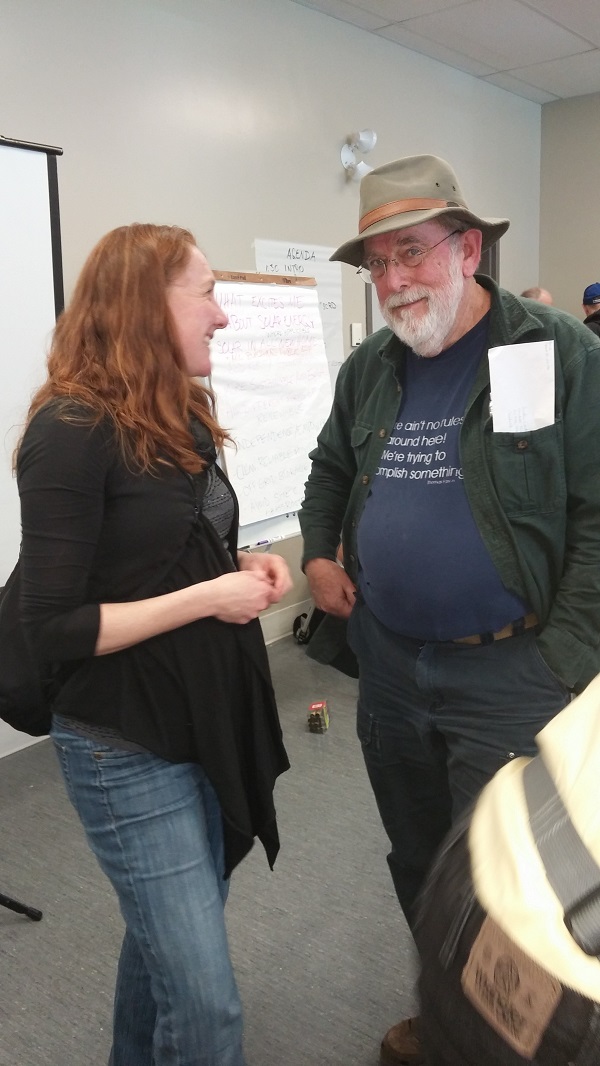 olicy that included all new rural buildings to be fitted for renewable solar energy. There are plans in the works for 2015-2016 that will include solar, wind and micro-hydro to reduce costs and emissions in SCRD operations. Clark said there are about 25 organizations working to link actions on sustainability in the District and she hoped the Solar Co-op would be the next group to join them.

Organizer Joanna Zilsel updated the group on the lates solar technology information and outlined goals and ideas for the proposed co-op. She mentioned the many changes occuring in the energy sector including reports that solar is cheaper than oil even at $10 per barrel. “The use of fossil fuels such as coal, dilbit and LNG which will be shipped through our waters just exaserbates climate change,” said Zilsel. “We can't do that anymore.”

She also mentioned the Site C dam proposal that will flood a valley that is prime agricultural land in BC while we are aware of our food source in California is in jeopardy. She said, “There is an alternative all we need is the political will.”

Here in BC, Vancouver Island’s T’Sou-ke NationT'Sou-ke Solar has installed a solar system that gives them all their power for their community. Salt Spring Island High School has 84 panels that feed into the grid and the energy check from this project goes to fund bursaries for the graduates. Combining solar, wind and hydro is Gabriola Energy on Gabriola Island.

The vision is for the Solar Co-op to form a legal entity and work together in a number of ways.

Funding was discussed including working with Community Futures, the Gibsons Chamber of Commerce, Bullfrog Power and the Sunshine Coast Credit Union and Van City. Finally Zisel reminded the audience that we need to make renewable energy a priority issue in the upcoming elections,.

Representatives from local contractors made presentations to the group. These included Clear Energy Solutions, Olson Electric/APS and Sunco Energy. All of the companies sited their goals of helping the environment and reducing energy consumption by 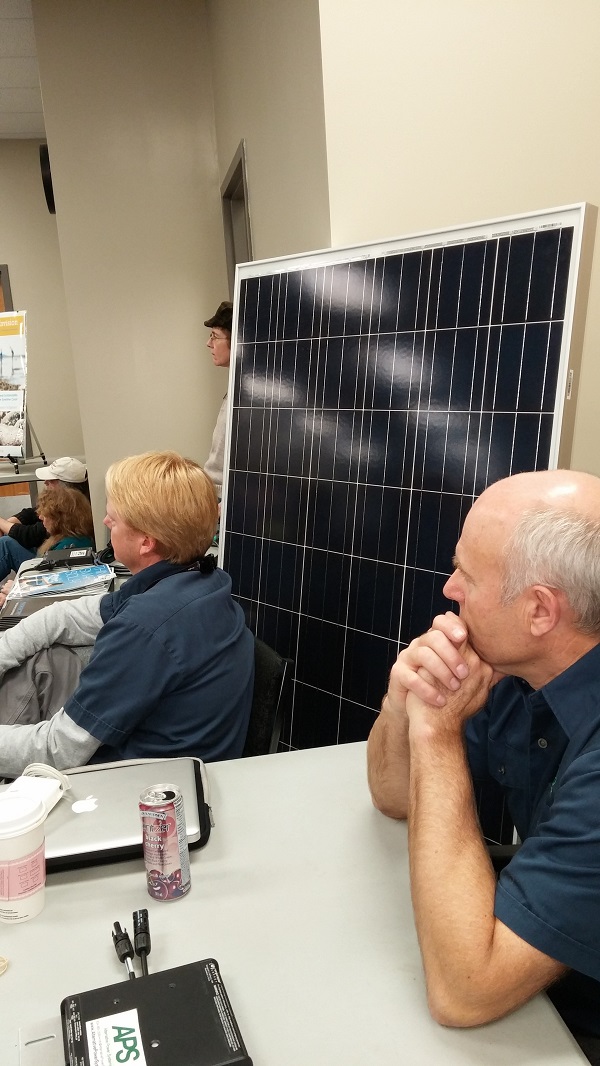 homeowners. Most homeowners are already using electricity from BC Hydro and the companies facilitate applications to be able to feed back into the grid. Sunco Energy cited that they have 10 years experience in off grid applications.

Homes have to get to net zero before they start showing credit from BC Hydro. This year there was an increase of 6% in hydro with a projected rate increase of 28% of the next five years. Right now there is a recovery of 28 years on your investment reported Sunco but with the rate increases and some incentives that could be cut in half. In order to make solar more feasable pressure must be put on the politicans to add incentives for moving to solar energy and to remove the PST.

The afternoon wrapped up with a review of potential actions including the solar farm, home installations, opportunities for investments, creating jobs and new skills training. The group also needs to make a decision on what kind of entity to develop: buyers club, non-profit society, cooperative, community contribution company or corporation.

The next steps to take will be decided at a core group meeting after which all interested parties will be contacted for the next meeting. Interested community members can contact This email address is being protected from spambots. You need JavaScript enabled to view it. to be added to the list or for more information.

Scott and Dennis of Olson Electric and APS brought one of their solar panels for viewing.