Two trucks owned by Direct Disposal Corporation of Sechelt were observed dumping a mixed load of waste at the Tymax and Coastland Wood Industries green waste site on Sechelt Inlet Road in Sechelt. The property is on land owned by the Sechelt Band.

Around 2:30 p.m. on Tuesday, January 26, Tymax owner Aaron Joe and a co-worker observed a truck owned by Direct Disposal enter their yard through the locked gate and proceed to one of their lumber stockpiles. Joe stated that the truck drove over to the lumber, picked up a load and dumped it in another area . The driver then dumped a load of mixed waste and garbage near the green waste site. Then a second truck came in and dumped another load.

"We were dumbfounded," said Joe. "It was so weird watching this happen." The men checked the load and found it to be a total mixed mess including medical waste, construction waste and paint. There is such a mixture and contamination of items that it cannot be put in a landfill he said. He also said that the lumber that was moved was milled to a customer's order. "This lumber was cut with a band saw so there are no marks on it. Now we cannot sell it to our customer as it is marked up," stated Joe.

The incident was reported to the RCMP . A spokesperson for the RCMP said that they are investigating and after the investigation it will be determined if there is a basis for charges. The investigation could take anywhere from a week to three months.

The Ministry of Environment has also been contacted. MOE public affairs officer Sumpanu Dalal reported that their staff has talked with the Sechelt Band and is determining if there was a violation, who should investigate and who is responsible for the cleanup. 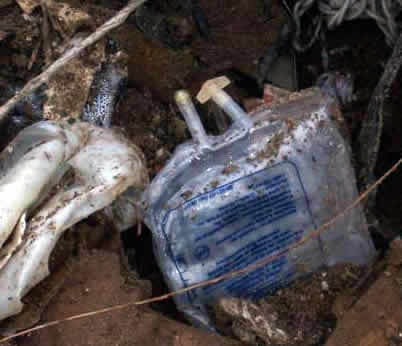 Band Chief Garry Feschuk viewed the site and met with the RCMP on Monday, February 1.  The Band will make a determination after meeting with Bonin and weighing all their options. These could include pressing charges and terminating any contracts they have with Direct Disposal.

Tymax and Coastland Wood Industries were jointly awarded the Sunshine Coast Regional District's (SCRD) contract to handle their green waste and construction waste. They were awarded the contract on October 30, 2009 after a competitive bidding process where Direct Disposal was one of the bidders. They had previously worked with Direct Disposal and were taking their green waste until about six months ago. Direct Disposal was given a gate key to the yard and after they terminated their dealings with Tymax/Coastland it was never returned.

Joe sees this as sour grapes on the part of Direct Disposal owner Norm Bonin. "Is this how the SCRD's contractors deal with their competitors? It is disgusting and a slap in the face to recycling," said Joe.

Direct Disposal owner Norm Bonin would not confirm or deny that his trucks and employees entered the Tymax/Coastland site. When contacted by Sustainable Coast, he said, "No comment. You should contact Aaron Joe."

Sustainable Coast will continue to follow this story and bring our readers updates as more information comes to light.