On June 28th the Gospel Rock Refinement Working Committee will present their "refined" development plan for public input at a public meeting, after a year of reviewing the development options of the original plan. Gibsons citizens rallied in Lower Gibsons on Sunday, June 27 in opposition to Gospel Rock waterfront development. 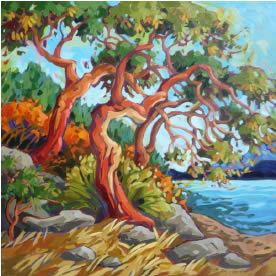 Gibsosns Council created a "select committee of Council", which did not include any members of the general public.

George A. M. Smith notes "As you likely know, Gibsons Council ignored the work of their own broadly based Select Committee, which recommended no development on the waterfront.....  They did not refine the Option B plan that the public supported, but rather came back with a single-option plan that increases the number of units that can be built to 757 and also recommends building on the waterfront. Now [at the public meeting] is the only remaining opportunity for Elphinstone or Gibsons people to register their opinion about this plan."

The public meeting on June 28th will be held at the Gibsons Community Centre, from 6 to 9 pm.

See the attached brochure from The Friends of Gospel Rock and the Gibsons Landing Community Association for more information.

View a slideshow of photos by Alan Sirulnikoff honouring Gospel Rock [below] in the Image Gallery. 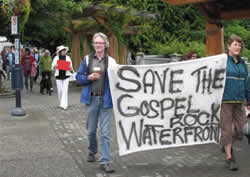 Thirty people marched in Lower Gibsons to oppose development of the Gospel Rock waterfront, and to encourage Gibsons citizens to make their voices heard at the public meeting June 28th.