One Can Make A Difference: 3rd Annual Environmental Film Festival

In conjunction with the SCCA, Onestraw Society and St. Hilda’s Anglican Church, the Gibsons United Church Green Team is pleased to announce the program for our Third annual Environmental Film Festival - One Can Make a Difference, Nov 5 and 6. This year, we have expanded our sponsorships and venues.

On Friday, November 5th, we’ll be showing Gasland, at 7 pm at the Gibsons Heritage Playhouse [See trailer video below]. This documentary, directed by Josh Fox, explores the drilling technology developed by Haliburton called hydraulic fracturing, to exploit huge shale natural gas reserves and it’s dire consequences.  This could very well be the next big environmental issue.  The film is being screened around the province and will be introduced by Karen Campbell of the Pembina Institute who will facilitate discussion afterwards.  Tickets for the event may be purchased at Gaia’s in Gibsons,  Windsong in Sechelt, or at the door - $10 each. 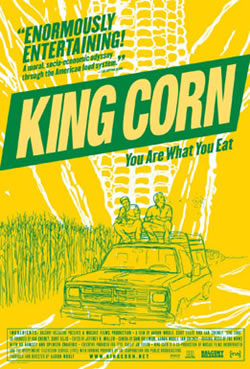 There are many events on Saturday, Nov. 6th.  Attend one, two or all of them!  On Saturday morning King Corn directed by Aaron Woolf will be shown at 10 am at Gibsons United Church. This is a humourous documentary about the history of corn in America and how it has made its way into almost all of the products in our grocery stores. Admission by donation. [View the the trailer: King Corn]

Also at Gibsons United Church and back by popular demand is the highly popular Eat Local Lunch at 12 noon. Wonderfully catered by Yvette Nelson, local produce will be featured, included wild sockeye salmon. Tickets for this are $12 at Gaia’s, Windsong in Sechelt or at the door. Luncheon speaker Dave Ryan of Fiddlehead Farmer’s Market will be talking about how much land is needed to feed our local population.

Attendees will have a chance to check out our ‘Eco” show, set up in the hall which will be jam packed with great displays.  An afternoon program of short documentaries, including several local ‘shorts’ will be screened.  All afternoon events take place at Gibsons United Church.

In the evening, the action moves to St. Hilda’s Church in Sechelt, with a screening of the Documentary Fresh directed by Ana Sofia Joanes, at 7 pm.  “Fresh’ celebrates the farmers, thinkers and business people who are re-inventing our food system after witnessing the terrible consequences of the industrial model in use for some years now. It offers a re-‘Fresh’-ing vision for our food future.  Admission by donation.

We have planned a program that’s sure to please, so come on out for as many of the events as you can.