In spite of large opposition, the Woodfibre LNG Project has received environmental assessment approval from Environment Minister Mary Polak and Natural Gas Development Minister Rich Coleman. The decision was made after considering a review led by British Columbia’s Environmental Assessment Office. The ministers have issued the certificate with legally enforceable conditions.

Woodfibre LNG Limited is proposing to build a liquefied natural gas (LNG) processing and export facility at the former Woodfibre pulp mill site, about seven kilometres southwest of Squamish, British Columbia. Woodfibre LNG is licenced to export about 2.1 million tonnes of LNG per year for 25 years.

The project has met with disapproval from municipalities, local citizens and organized groups. Many feel their voices are not being heard. Community groups such as The Future of Howe Sound Society, Concerned Citizens of Bowen and My Sea to Sky continue to express concern over this proposal. A Save Our Sound (SOS) flotilla to protest the LNG Project was held in July. 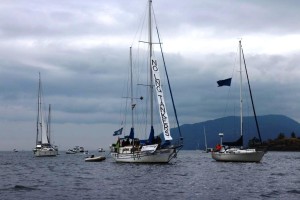 Ruth Simons, executive director of The Future of Howe Sound Society, says she is not surprised by the announcement and that her organization continues to feel that this project has not obtained the social license to go ahead. "We feel that there should be a more comprehensive overall plan to go to when major projects such as this one are decided on," said Simons. She says there are many pieces to this project including the Federal departments of DFO, Environment and Transportation that need to make their decisions. And with a new Federal government some things could change.

“Approving this project pushes BC further down the wrong path,” said Eoin Madden, Climate Campaigner with the Wilderness Committee. “We are hitching our wagon to fossil fuels right when societies are beginning to embrace solar and wind energy.” The Wilderness Committee cautioned that the environmental and climate impacts of proposed LNG plants like Woodfibre are exacerbated by the fact that approximately 90 per cent of the gas needed to produce BC’s LNG will come from fracking – a hazardous extraction method that pollutes freshwater and sends large amounts of greenhouse gases into the atmosphere.

The plant will draw 17,000 cubic metres of seawater from Howe Sound every hour to supply its cooling system, and return it to the sound in a much hotter and chlorinated form. “When it comes to marine life recovery, Howe Sound is a success story,” said Madden, “We need to stand back and really examine what those volumes of heated water and chlorine will mean for herring and other wildlife. If California has banned this process, why are we green-lighting it in BC?”

Squamish Nation Council states, "This decision is only for the LNG facility project and not the pipeline project proposed by Fortis BC. Therefore, the decision to approve this Environmental Agreement is not an approval of the whole LNG project, only a conditional approval of part of it. The Squamish Nation is currently negotiating an Environmental Agreement with Fortis BC for the pipeline project and a government to government agreement with the Province regarding its conditions."